Details
In Innovation
/ Published on 15 November 2013

Willunga Farmers Market is introducing the Young Farmers Scholarship, a $10,000 scholarship open to 18 to 35 year olds interested in farming but discouraged by the obstacles of entering the industry, like access to land, equipment and start up capital.

The scholarship will provide $3,000 worth of small business and agricultural training together with a cash component of $7,000 which will be made available for items such as seeds, tools, land rental and insurance.

"The passion for farm direct produce and the growing number of farmers markets in South Australia is encouraging, but the number of active farmers is steadily declining,’ said WFM Market Manager Steve Ashley.

"Farmers only represent 1.7% of all employed people in 2010-2011 according to the Australian Bureau of Statistics. Not only has this figure fallen by 2.9% since 1996-1997, but currently 23 per cent of farmers are over the average retirement age of 65.

Details
In Innovation
/ Published on 02 November 2013 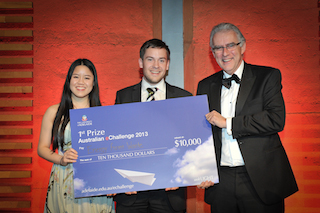 Professor Noel Lindsay, ECIC Director, says Energy from Waste was awarded first prize because the team delivered a proficient business plan that could result in positive outcomes for both local businesses and the environment.

Details
In Innovation
/ Published on 18 October 2013

SA’s wine history unfolds in a just-released film about the history of the State's iconic wine-making dynasty, the Hamilton Family, spanning 176 years of vinicultural life & times

Wine Line – the Hamilton Story is a dramatised documentary film that highlights surprising human relationships and coincidences that underpinned the success of the family’s wine ventures – and the unheralded benefits they brought to the Australian wine industry.

Premiering last night at the equally iconic Capri Theatre, the film takes viewers on a creative journey through the history, life and times of SA’s earliest settlers - the Hamilton Family – who arrived on the second ship in the new colony in 1837. The family became founders of Hamilton’s Wines.

The documentary started as a corporate video production for Dr Richard Hamilton’s Leconfield Wines business – but as the family history was unearthed by a film-maker researcher, the project grew rapidly to a feature film reflecting six generations of a significant SA family. Dr Richard Hamilton is the great-great-grandson of the original founder Richard Hamilton.

“It was a passion of mine to see a way of telling the story of a unique family history after 175 years. I knew this was the time to act and what we came up with was a remarkable motion picture in which we had to recreate fascinating historic facts that were uncovered,” Dr Hamilton said.

The film was launched this week at the Capri Cinema on the exact day 176 years ago that Richard Hamilton, a tailor from Dover, England, set foot in South Australia.