New GFC threatens because of too big to fail megabanks

Details
In Innovation
/ Published on 29 August 2011 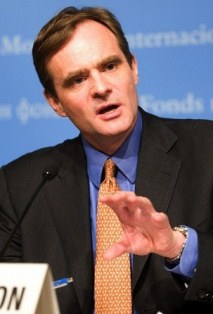 Leading US economist Simon Johnson warns that the world economy continues to face major problems because the largest banks in the US remain “too big to fail”.

”If one or more of them were in serious trouble, they would be saved by government action – because the consequences of inaction are just too scary,” he observes.

Even after the ruinous financial crisis of 2008, Johnson observes that these “too big to fail” megabanks continue to hold America and the global economy hostage. He warns that they threaten yet another financial meltdown with their risk-taking and toxic “business as usual” practices.

In a cogent, concise and confronting analysis of the economic threat posed by this concentration of financial power, Johnson argues that the best defence against the “megabank” threat is a radical breakup and reconfiguration of megabanks so they become small enough to fail.

Simon Johnson teaches at the Sloan School of Management at MIT. He is also a senior fellow at the Peterson Institute for International Economics in Washington, DC, and a member of the Congressional Budget Office's Panel of Economic Advisers. He is a regular commentator and writer on financial affairs and co-author of 13 Bankers: The Wall Street Takeover and the Next Financial Meltdown.

Since the GFC hit in 2008, US politicians including President Barack Obama have demonstrated their willing to spend many billions of public dollars when the interests of these privately-owned behemoths are threatened.

Concurrently, as dozens of smaller US banks are “allowed to fail”, go out of existence or are sold to larger banks, the banking power in the United States becomes further consolidated in the hands of the megabanks.

Simon Johnson claims that the inherent “too big to fail” status of the megabanks gives them a funding advantage of about “50 basis points” over there competitors, which further concentrates financial power and importance in their hands.

13 Bankers claims that the six biggest banks in the United States now possess assets equivalent to 60 per cent of the Gross National Product (GDP). That figure was less than 20 per cent in the 1990s.

Johnson describes the combination of that massive concentration of assets, the funding advantage of an implicit government guarantee and an executive incentive system that rewards leveraged debt rather than equity as a recipe for future disaster.

For more information about 13 Bankers: The Wall Street Takeover and the Next Financial Meltdown, visit http://13bankers.com/