Details
In Innovation
/ Published on 24 October 2011 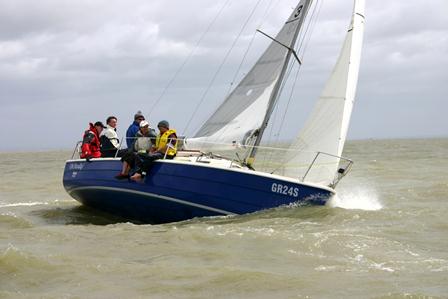 One of South Australia’s best known yacht races, the Milang-Goolwa Freshwater Classic will be held on the weekend of January 21-22, in 2012 after a five-year hiatus because of drought and low water levels.

The Marina Hindmarsh Island Milang-Goolwa Freshwater Classic race will be a spectacular finale to Goolwa Regatta Week, which starts the week beforehand on Saturday January 14 and will offer many community activities on and off the water during the week.

Racing is open to many off-the-beach monohull skiff and catamaran classes as well as trailer-sailer yachts and vintage river boats. There is a $500 Cash Prize for the special Friday night pre-race event, the ‘Doser Freight Dash For Cash’  short race knock-out series that is sailed right in front of the club marina.

The Goolwa Regatta Yacht Club (GRYC) is relaunching the race with great local support now that the River Murray waters are back and flowing.   GRYC Commodore Don Richardson said the event has attracted strong corporate sponsorship with local developer, The Marina Hindmarsh Island, stepping up as Principal Sponsor for the next five years. 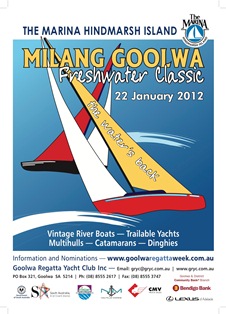 The race begins at the lakeside town of Milang and continues across Lake Alexandrina and down the River Murray to the river port of Goolwa, a total distance of 50-kilometres. In its 42-year history, the Freshwater Classic has seen thousands of local and interstate boats taking part.

“It will be the most significant sporting event in the region once more, but it will also be an important and fun community event,’’ says GRYC Commodore Don Richardson. “The whole Lakes and Lower Murray River region has experienced so much suffering and hardship over the past 10 years of drought and it is fantastic to see its revival as the waters have returned,’’ he said.

GRYC event director, Rear Commodore Locky McLaren says thousands of spectators, both locals and tourists, usually watch the Milang to Goolwa race along the route downstream to Goolwa.  This year will be special.

“Many people in our riverside communities remember their first ‘Freshwater Classic’ whether they were taking part or on the banks as spectators,’’ says Locky. “Our re-launched event is going to be something very special, and we invite all sailors who like a challenge to put the 22nd January date in their diaries now.’’

“The race links the three lake and riverside towns of Milang, Clayton and Goolwa in a singular event, the communities are involved in the staging of the event, and the whole course offers spectacular viewing.”

“We also believe the race will draw attention at holiday time to the Southern Fleurieu, where the Lower Lakes, the River Murray and the Coorong form exciting waterways and recreational playgrounds, ’’ he says.

“The whole Goolwa Regatta Week will showcase the lakes and the river as a tourist attraction.’’