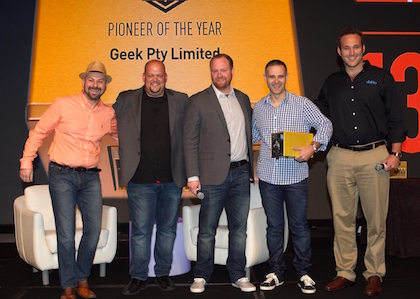 Geek founder and chairman Jon Paior said the business had been hit by a CryptoLocker scam, which was disturbingly common in Australia. “This client, a mid-tier Adelaide accounting firm, had bought the Datto backup appliance on our advice, hoping to never need it,” he said.

“However, their worst nightmare was realised when a staff member opened an AGL-branded scam email that generated a screen demanding thousands of dollars. All their files were encrypted, and totally inaccessible, including the main database. They were dead in the water.

“Using the Datto appliance, we had them back up and running within 15 minutes. Being an accounting firm, they later calculated that their old backup product would have taken at least six hours to fully restore those terabytes of data. With 120 employees, each hour of downtime would have cost them about $25,000, so the instant restore meant the return on their investment in the Datto business continuity solution was immense.”

Last week, Geek collected the inaugural Golden Datto Pioneer of the Year award from US business continuity solutions specialist Datto. Since Geek started selling the Datto backup and disaster recovery appliance in Australia last year, the Adelaide-based business has not only equipped dozens of Australian companies, such as the accounting firm, to protect themselves against data loss and cryptolocking scams, but also helped potential competitors to win business with the Datto solution.

Datto Inc. ANZ Sales Director James Bergl said Geek was an outstanding IT citizen. “The Golden Datto awards honour partners such as Geek who have truly gone above and beyond the call of duty,” he said.

Geek Pty Ltd is an IT services specialist that employs 17 people to support business networks and systems for clients throughout Australia. Jon Paior and Geek Managing Director Tirimacco travelled to Nashville, Tennessee to receive the Golden Datto at DattoCon16, Datto’s annual partner summit.

With them was Paul Mangano, founder of Mangano IT, a Brisbane-based technology services firm that learned about the benefits of Datto backup solutions from Geek. “Having heard about how much time Geek saved by managing backups using Datto whilst improving client uptime, we were keen to learn more,” he said. “Attending DattoCon16 upon Geek’s recommendation was an excellent way to better understand the product and how it works.” 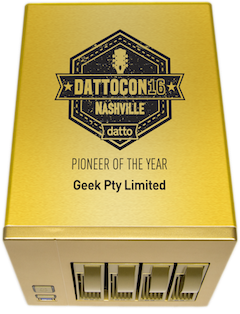 Giovanni Tirimacco said the award represented much more than his company’s success. “It’s a win for Australian companies that didn’t suffer the disaster of cryptolocking,” he said.

“We’re happy to share our knowledge with our competitors to sell Datto because it avoids a lot of pain for customers, so we want as many businesses as possible to hear about it, advocate it and use it.”

Cryptolocking, which nets hundreds of millions of dollars for criminal and potentially terrorist organisations globally, covertly installs a ‘ransomware’ program on a computer or network to restrict user access and then demands a ransom to lift that restriction. Once infected, there is no way to decrypt the data without paying the ransom or restoring from backup. In March this year, the Locky ransomware program reportedly hit tens of thousands of Australian computers.

Jon Paior said Geek had worked with Datto to customise their product for the Australian market. “As well as a local presence, the right pricing and local data centres, we requested new features in the product that directly responded to the needs of Australian customers,” he said.

“These include customisable off-site replication, which means we can back up data to more flexible locations, and file-based backups, addressing the fact that customers have to pay for bandwidth in Australia.”

Datto is an innovative provider of comprehensive backup, recovery and business continuity solutions used by thousands of managed service providers worldwide. Datto’s 200+ PB private cloud and family of software and hardware devices provide Total Data Protection everywhere business data lives. Whether your data is on-premises in a physical or virtual server, or in the cloud via SaaS applications, only Datto offers end-to-end recoverability and single-vendor accountability. Founded in 2007 by Austin McChord, Datto is privately held and profitable, with venture backing by General Catalyst Partners and Technology.