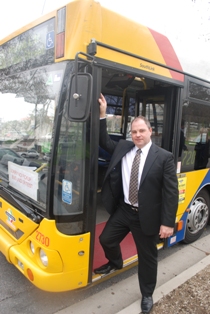 Dubbed i-Commute, the system has been developed and funded by a coalition of technology companies including MIMP Connecting Solutions, transSpot™, Cisco, Adam Internet, Podmo Mobile and Webshield Content Filtering. Also, the University of South Australia's Institute for Telecommunications Research assisted in testing the system.

Adelaide is the first city in Australia to offer real-time route information with free Internet access aboard a public transport bus, putting the South Australian capital on a par with world-leading cities that include San Francisco, Seoul, Lisbon, Madrid, and Hamburg.

MIMP General Manager Allan Aitchison said the key to the system’s success was its affordability.
“In future, the opportunity exists for i-Commute services to be paid for by advertising from companies along the bus route,” he said. “As the bus approaches a stop, ads and community information relating to that location will be displayed on screen.

“The system is also capable of evolving to meet passenger needs. For example, future features may include audio announcements about the upcoming stops for the visually impaired, bus stop information to inform passengers of connecting buses and how long they will be, and real-time information about bus arrivals accessible on the Internet and mobile phones.”

i-Commute will display the distance to forthcoming bus stops. As the bus approaches the stop, the i-Commute transSpot™ screens will display information about the location and any local business advertising associated with that stop.

Major benefits of the i-Commute system include live access to transSpot™ transport information, real-time security and location-specific advertising that can assist to fund the system.

Passengers on the i-Commute bus will be able to use WiFi-equipped devices to access the Internet for free through Adam Internet while inappropriate content will be filtered using Webshield’s filtering systems. Free Bluetooth services provided by Podmo will allow any capable mobile device to access applications for gaming and information. Access to current news on-screen will also be available.

Real-time security is provided by an on-board camera which transmits information to a control centre where staff can monitor any incidents and contact police if necessary.

Costing nearly $500,000 to create, the i-Commute system has been designed, engineered, installed and funded by consortium members during the past 18 months, with support from the SA Government. The on-board system includes two transSpot™ 19 -inch, toughened glass display screens, a hardened PC to withstand the vibration that occurs on a bus, Cisco MAR (Mobile Access Router) devices which are used in US Army tanks, Podmo equipment and wiring secreted in the bus handrails.