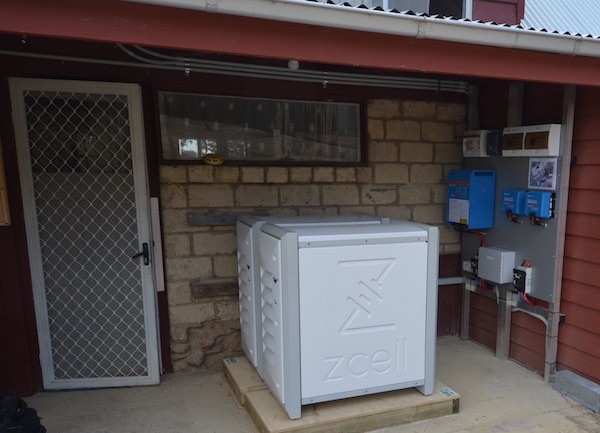 “We didn’t want to ‘calorie count’ our energy usage, so Redflow gives us the confidence to turn on appliances at night. We’re not afraid to do loads of washing after the sun has gone down because we’re not draining the battery wildly.

“We chose ZCell batteries because of their superior energy storage technology. It is 100 per cent based on the chemistry, which is far and away better than anything else. Our main criteria were stability and getting the most bang for buck, the most energy that we could get for the least money. It wasn't necessarily a per kWh cost, it was more the performance and longevity of the battery. We live off-grid, so we need every drop of power we can generate with no degradation over the years.

“Also, I want to build a digital editing and mixing studio here, so I can work from home. These batteries will deliver clean power for when I have people bringing $10,000 amps into the studio.”

Adrian said the superior performance of the ZCell batteries, installed by Off-Grid Energy Australia, included their ability to discharge all stored power without damaging the battery and to retain each battery’s full 10 kWh storage capacity throughout its warranted 10 years or 36,500 kWh of storage.

The cottage generates 5.2 kilowatts peak (kWp) of energy from 21 photovoltaic solar panels on the roof of a nearby shed. With 20 kWh total storage capacity, the ZCells replaced a 1.5 kWh lead-acid battery, which required a backup diesel generator to supplement it every couple of days during winter.

Adrian said the upgrade in storage capacity had a dramatic impact. “Now, we only use the backup generator occasionally, if there are a bunch of cloudy days in a row,” he said.

“Also, the ZCell batteries and Victron battery inverter are easy to operate. Redflow and Off-Grid Energy are great at supporting us. They keep improving ZCell which is now brilliant.”

You can read the full ZCell case study by visiting the Redflow website.