Attack of the clones

Details
In Technofile
/ Published on 05 December 2008

JOHN HARRIS discovers that Apple's popular iPhone has a new rival, in the form of Blackberry Storm, released in Australia today. 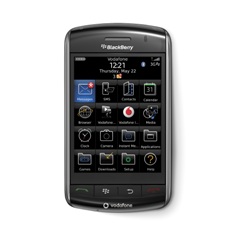 Earning the disdain of my trend-eschewing friends, I’ve raved about the iPhone 3G since it was released mid year. While it’s not perfect, it makes telephone calls well enough most of the time and does many useful things that I continue to discover.

So it was with great interest that I unpacked one of the first Blackberry Storms to arrive in Adelaide, loaned to me a couple of days prior to release by telco Vodafone, which is selling them exclusively in Australia. There's no RRP for the Storm because  Vodafone is not selling it as a standalone handset, just as part of a contract.

Made by Canada-based Research in Motion (RIM), the Blackberry took the world by storm about six years ago, becoming so addictive among executives that it earned the moniker “Crackberry”.

The stubby handset with its qwerty keypad was designed as a sophisticated and secure real-time email client that could also make phone calls and synchronise contacts, calenders and tasks with corporate email systems.

While the iPhone has earned an almost fanatical following, the various iterations of Blackberry have retained a reputation as the thinking man’s (and woman’s) communication device of choice.

A key attraction from an employer’s point of view is the ability to remotely disable the device if it is lost, ensuring no sensitive secrets are divulged if the Blackberry slips out of your pocket in a cab.

The Storm blew into my office on Wednesday. Its package is comprehensive including a manual, a CD, stereo headset, USB cable, a black case and the always-useful international power pack, with interchangeable plugs.

It even came with a polishing cloth to keep the screen clean.

Like the iPhone, the Storm is a nearly all-screen device: Unlike the iPhone’s single Home button, the Storm has six physical buttons on its front panel: Send, End/Power, Menu and Back buttons below the screen and Lock and Mute buttons at the top.

Switching it on was easy (which is not as common an experience as you’d expect) while the 480 by 360 pixel screen is bright, clear and easy to read.

The screen design was easy enough to work out and, as with all smartphones, jammed to the gills with features and functions.

The touchscreen took some getting used to as selecting on-screen icons or numbers requires actual physical pressure on the screen, depressing it slightly, rather than just a finger swipe.

This convenient feature reduces the risk of accidental calls that is common in many touchscreen phones I’ve used.

Another useful feature was the Back button - like a reverse gear – which made for easy navigation. The Storm also has a built-in GPS which is the technology must-have for the decade.

A feature the Storm shares with iPhone is the accelerometer which adjusts the screen from portrait to landscape orientation depending on which way you hold it. Disconcertingly, the unit I reviewed had a tendency to jump from one mode to another with even slight movements.

I found the on-screen keyboard fiddly to use, especially its default to predictive text which made it impossible to type jharris.

However, quibbles aside, the Storm is a handy unit, although it lags the iPhone in two areas.

Firstly, it does not support wireless networking, which is a great way to stay within your data quota if you spend a lot of time at home or in the office.

Secondly, it does not yet have anything like the iPhone’s incredibly useful App Store, which allows you to download and install iPhone programs that continually extend its usefulness. RIM is working on addressing this shortcoming, so watch this space.

The Blackberry Storm is a great handset and I’m sure it’s advent will gladden the hearts of many an IT manager trying to hold back the iPhone invasion.

But, for me, the Blackberry Storm is more iClone than iPhone.

John Harris is managing director of Impress Media Australia. You can view his website at www.johnharris.net.au .