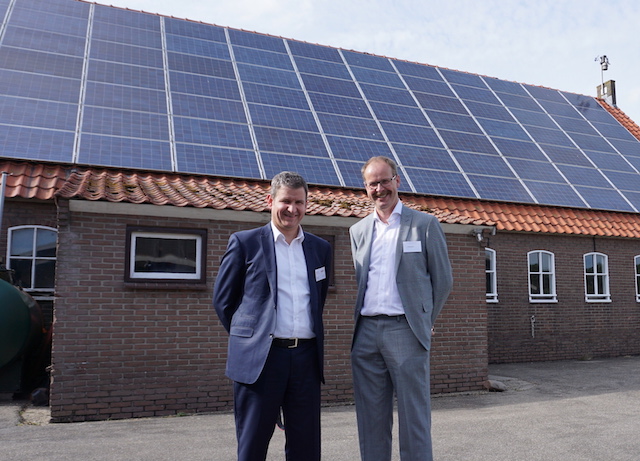 Dubbed the Photon Farmer, the project aims to store solar energy for the farm’s use with six 10 kilowatt hour (kWh) ZBM2 batteries, the first Redflow deployment in theNetherlands.

Located at Vierakker in the eastern Netherlands, the 57.5-hectare family-owned farm currently stocks 110 diary cows. Due to public importance, the European Union is co-financing the deployment, which could revolutionise energy supply by supporting businesses to become energy independent.

ICL, a leading global producer of bromine and supplier of the advanced zinc-bromide electrolyte used in ZBM2 batteries, proposed Redflow for the Photon Farmer project because of the ground-breaking advantages of zinc-bromine flow batteries over older battery types such as lithium and lead-acid.

Redflow Global Sales Director Andrew Kempster, who is visiting the Netherlands this week for the project’s launch, said the Photon Farmer had produced energy with solar panels for several years. “The battery project is seeking the best business model for future local sustainable energy production, including energy storage in a battery,” he said. “Our zinc-bromine flow battery technology is well-suited for this project.”

A prime driver for the project is to enhance the ability of farms to produce energy from renewable sources, leveraging large roofs with room for solar panels and even available space for windmills.

The Dutch energy system is based on large, central production facilities with many small users whereas renewable energy production typically occurs at distributed locations. Currently, energy is produced in line with demand, which is not possible with renewable energy. For example, a dairy farmer cannot choose to milk cows only when the sun shines or when the wind blows.

Batteries solve this problem by storing surplus renewable energy. The Photon Farmer project aims to learn if the ZBM2, with its intelligent battery management system, can optimally match supply and demand. The Redflow ZBM2 is the world’s smallest flow battery.

Redflow’s unique battery is intrinsically fire safe, due to its design and the fact that its bromine electrolyte is inherently non-flammable. The ZBM2 delivers superior energy storage performance, being capable of 100 per cent daily Depth of Discharge and delivers 10 kWh of sustained storage for its warranted 10 years. This means no loss of energy storage capacity over time, as occurs with other battery chemistries such as lithium and lead-acid.

The Redflow ZBM2 battery is sold and installed globally for use in small to large-scale telecommunications, industrial and commercial applications. ZBM2 batteries are already in use in Austria, Germany, Portugal and Spain.

The ZBM2 zinc-bromine flow battery is made from components that are easily recyclable or reusable, which makes it a sustainable battery solution. Due to this unique design, the ZBM2 was nominated for the Responsible Care Award in 2016 by the VNCI – an annual sustainability prize within the Dutch chemical industry. To find out more about Redflow visit www.redflow.com.