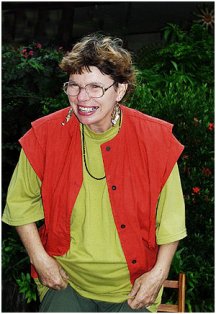 US audiences have enthusiastically welcomed the sustainable tourism and inter-cultural insights presented in lectures by Australian eco-tourism expert Denise Goodfellow.

Denise, a Darwin-based author who also runs an eco-tourism business, started the US lecture tour earlier this month in the north western state of Washington.

Topics covered during Denise’s two-month lecture tour include the wildlife and wetlands of northern Australia, bird watching in the Top End and indigenous perspectives on conservation.

After a lecture on intercultural relations at San Francisco’s Berkely City College received strong applause, Denise met a number of African-American and Indigenous Americans students who voiced their concerns over the state of Indigenous people and discussed Denise’s experiences of the perspectives of indigenous Australians.

Raised in Adelaide, Denise Lawungkurr Goodfellow moved to the NT in 1975 where she pursued a career path 'like a mad dog's dinner,' ranging from music teacher and buffalo shooter to biologist, guide, lecturer, cross-cultural consultant, author, and illustrator.

As an adopted member of the Ngalanbali clan of the Kunwinjku people of north west Arnhem Land, she is the family snake-catcher and a dab hand at catching pigs with a castnet. Lawungkurr, a name given to her by the clan matriarchs is the name of a long-dead but still highly honoured woman of her clan.

In 2000 Denise worked as interpreter/transcriber on the Lonely Planet's Guide to Aboriginal Australia. Denise also lectures in environmental studies for the University of NSW’s summer school.

You can learn more about Denise Goodfellow at her website www.denisegoodfellow.com.