Redflow batteries deliver 24-hour power and save $10,000 in diesel per year for off-grid WA station

Solar panels installed at Yallalong Station in remote WAYallalong Station, a 348,000-hectare cattle property 650km north of Perth, has deployed a Redflow battery-based energy storage system to boost its energy independence and save thousands a year in diesel costs. The cattle...

Just a country preacher trying to explain the Gospel

Details
In Travel
/ Published on 21 September 2008 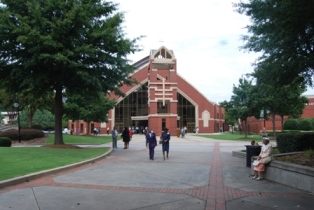 I distinguished myself today as the worst-dressed person to attend the 11am service at the Ebenezer Baptist Church.

The day started badly when I woke up in my room at The Ellis Hotel at 10.50am after hitting the sack at 2.30am (about 4pm in Adelaide) after a midnight visit to Blind Willie's blues club in the entertainment district of Virginia Highland. Before climbing into bed, I'd closed all the curtains so day's break would not disturb my slumber.

It worked! The result was eight and a half hours of relatively deep sleep - my only interruptions were the bleep of an incoming text message and a full bladder. I finally woke when the driving force behind this trip Robbie headed for the shower. I rolled over, checked my watch and then immediately double-checked the hotel clock to make certain my eyes were not full of sleep.

I spent the next 10 minutes cramming the tangle of electrical gadgets that had crept out of my bags back inside and climbing into my travelling clothes. I told Robbie to meet me at the Australian Bakery in East Atlanta. "I'm off to church," I said.

"You do what you gotta do Johnny," he replied, sleepily.

Downstairs I paid the bill and jumped in a cab which wound its circuitous route to the church at the centre of the Martin Luther King Jnr National Historic Site, in the Sweet Auburn area east of downtown Atlanta. I emerged from the cab outside the church shortly after 11.15am.

Unfortunately, my travelling clothes comprised a baggy pair of old jeans, a wrinkled black shirt and a well-worn leather jacket. As I entered the church lobby, I felt like a hobo compared to the splendidly arrayed brothers and sisters who packed the pews at Ebenezer Baptist. When a security guard called me over to his table, I thought to myself: "Oh no, this is where they take out the trash". Fortunately, his concern related more to the contents of my shabby day pack than my sartorial shortcomings. He was particularly worried about a large round lump, which turned out to be my camera.

As I entered the chapel, I was invited to take a seat by ushers in snappy gray suits as the pastor was encouraging the congregation to collect and complete registration papers for the forthcoming presidential election. "Get your stuff together," he said. "Use those hands that were clapping to register to vote."

The Ebenezer Baptist church is a wonderfully expansive A frame structure, that rises from the altar, with huge dual skylights spanning the apex of the roof's spine. Combined with large picture windows on either side of the building, they flood the room with glorious natural light.  After praise songs by the inspirational choir, the pastor began his sermon, which continued a series about Discipleship. His topic was "Can I get a witness?" drawing on the story of Nicodemus from the Gospel according to John, who went from curiosity (John 3) to concerned (John 7) to converted (John 19).

The wide-ranging sermon touched on subjects as diverse as the death penalty to economic theories.

"The president came out of hiding this week," he said, to applause from the congregation, before going on to point out that the Bush Administration had committed more than $700 billion to prop up the US financial system. He recalled that when the Government had been asked several months earlier to assist ordinary people who were losing their homes, the response was talk about taking "personal responsibility" and that people had to face the consequence of their decisions. He went on to ask why the Government regarded assistance to working class and middle class people losing their homes as "socialism," but then provided billions of dollars to help large corporations, which was described as "pragmatism"?

"I don't know much about economics, I'm just a country preacher trying to explain the Gospel, but I ask that question?"

The sermon called on us all to witness for Jesus as our Lord and his spirit did fill the place, especially when everyone joined hands - even with a daggy-looking outsider - to sing the final hymn.

As I left the service, I wondered how much influence these church-based calls for voter registration will influence the presidential election, which the pastor referred to as "the Race":

I doubt it was a double entendre!